The New York Jets have a tricky legacy as it relates to their place in the NFL‘s hierarchy. The Jets, who just completed their 60th season of professional football, are 28th all-time in terms of winning percentage. They have just 19 winning seasons and 14 playoff berths, and they have yet to return to the Super Bowl since defeating the Colts in Super Bowl III.

That being said, you can’t talk about the history of professional football without discussing the Jets, whose upset victory over Baltimore in January of 1969 remains arguably the greatest upset in the history of professional sports. And after becoming the first AFL team to win the Super Bowl, the Jets enjoyed several other successful runs that includes the franchise’s “New York Sack Exchange” era of the 1980s, the team’s improbable AFC Championship Game appearance in 1998 (two years following a 1-15 season) and their back-to-back AFC title game appearances in 2009-10.

Over the years, the Jets have had some of the best players in NFL history. As part of CBS Sports’ “Franchise Five” features, we’ve ranked the Jets’ greatest coach, quarterback and three other players that make up the five most prominent figures in franchise history. Credit to Brian Costello, a longtime Jets beat reporter for the New York Post, for his input when creating this list. Without further ado, let’s get starter.

The only coach in franchise history to win it all, Ewbank led the Jets, an 18-point underdog, to a Super Bowl victory over the Colts, the team that dismissed him six years earlier despite leading Baltimore to back-to-back NFL titles in 1958-59.

Ewbank’s coaching prowess was on full display in Super Bowl III. Coaching against eventual Hall of Famers in Colts head coach Don Shula and defensive coordinator Chuck Noll, Ewbank instructed his quarterback, Joe Namath, to shorten his dropback in order to beat Baltimore’s ferocious pass rush. The result was an efficient 17-of-28 passing performance for Namath, who didn’t have to throw a pass during the fourth quarter of New York’s 16-7 victory. Ewbank’s defense was equally up to the task, forcing five turnovers and four interceptions while forcing NFL MVP Earl Morrall out of the game midway through the third quarter.

While he finished his career with the Jets with a losing record (going 71-77-6 during his 11 seasons in New York), Ewbank’s role in the greatest moment in franchise history made him a lock for this list.

A two-time AFL MVP, “Broadway” Joe Namath became the first player in pro football history to throw for over 4,000 yards in a season in 1967. The next season, Namath led the Jets to a division title before throwing the game-winning touchdown pass in New York’s AFL Championship Game victory over the Raiders.

Already a star, Namath earned pro football immortality after backing up his pregame prediction by leading the Jets to an upset win over the heavily-favored Colts in Super Bowl III. With

Baltimore’s defense focused on stopping All-Pro receiver Don Maynard, Namath instead threw early and often to George Sauer, whose eight catches for 133 yards helped the Jets register four scoring drives against Baltimore’s formidable defense. Namath’s play-calling was also a critical factor in Super Bowl III. While he had success in the passing game, Namath made sure to keep the Colts honest with a steady diet of running back Matt Snell, who scored the Jets’ only touchdown while gaining 121 yards on 30 carries.

After leading the Jets to another division title in 1969, knee issues began to plague Namath, who missed most of the ’70 and ’71 seasons. When he was healthy, Namath was still one of the league’s best quarterbacks. In 1972, he won the last of his three passing titles. Two years later, he was the NFL’s Comeback Player of the Year after missing most of the previous season due to injury.

While his ailing knees hindered him during the second half of his career, Namath’s brilliance (when healthy) and bravado made him a Hall of Famer and one of the most influential figures in pro football history. 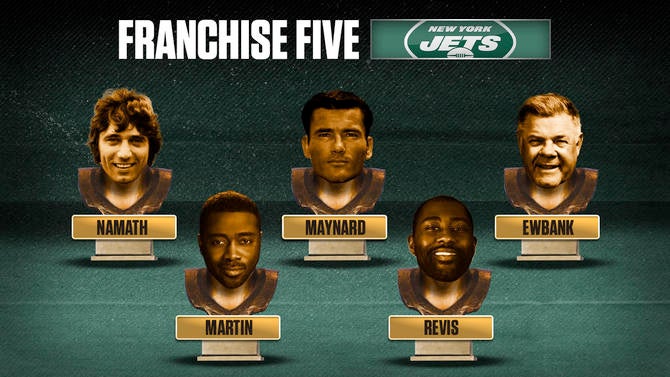 The Jets have had some good receivers over their history, a list of pass catchers that includes George Sauer, Wesley Walker, Wayne Chrebet, Laveranues Coles, and Keyshawn Johnson. But the best receiver in franchise history is Don Maynard, the club’s all-time career leader in catches (627), yards (11,834) and touchdowns (88).

A member of the Pro Football Hall of Fame, Maynard was tabbed as a Pro Bowler four times in a five-year span from 1965-69. He was an instant success in New York, catching 72 passes for 1,265 yards and six touchdowns in 1960, the franchise’s inaugural season. Maynard developed an immediate rapport with Namath, who joined the Jets in 1965. That season, Maynard led the AFL with 14 touchdown receptions. In 1967, he paced the AFL with 1,434 yards while averaging 20.2 yards per catch. In 1968, he led the AFL with an average of 22.8 yards per catch while helping the Jets capture a division title. His game-winning catch in the AFL title game helped lead the Jets to their upset win over the Colts in Super Bowl III.

Maynard earned his final Pro Bowl selection in 1969 when, at the age of 34, he averaged 20 yards per catch while helping the Jets capture a third consecutive division crown. He retired after the 1972 season with a career average of 18.7 yards per catch, the 16th-highest career total in history.

The best running back in franchise history, Martin, who was inducted in to the Pro Football Hall of Fame in 2012, retired after the 2005 season as the fourth-leading rusher in NFL history. Martin gained 10,302 of his 14,101 career rushing yards with the Jets, who acquired him as a free agent during the 1998 offseason.

After helping the Patriots reach the Super Bowl during his second NFL season, Martin made a similar impact during his first season with the Jets, a team that won just one game two years earlier. Reunited with Bill Parcells (his coach for two seasons in New England), Martin earned Pro Bowl honors in 1998 while helping New York advance to the AFC Championship Game. Martin gave the Jets an early lead before John Elway led the defending champion Broncos to a come-from-behind victory.

Over the next seven seasons, Martin remained the centerpiece of the Jets’ offense, helping lead New York to postseason appearances in 2001, ’02 and in ’04. In 2004, the 31-year-old, Martin, despite playing with a torn MCL, became the oldest player to win the rushing title, racking up a career-high 1,697 yards. Martin then helped lead the Jets to an upset win over the Chargers in the wild-card round. That season also saw Martin join Barry Sanders as the only two running backs in NFL history to record 10 consecutive seasons of at least 1,000 rushing yards.

Revis, whose dominant coverage against receivers earned him the nickname “Revis Island,” was arguably the NFL’s best cornerback during his era. The 14th overall pick in the 2007 draft, Revis, a five-time Pro Bowler and three-time All-Pro during his eight seasons with the Jets, had one of the best seasons a cornerback has ever had in 2009. That season, Revis broke up a league-high 31 passes while returning one of his six interceptions for a touchdown. His play that season and next helped the Jets make back-to-back appearances in the AFC title game. In 2015, after spending the previous two seasons in Tampa Bay and New England (respectively), Revis earned his final Pro Bowl selection while helping the Jets post a 10-6 record.

Revis, who will be eligible for induction into the Hall of Fame in 2023, is first all-time in Jets history with 112 passes defensed.

Mark Gastineau, the franchise’s career leader with 74 sacks, led the NFL in sacks during the 1983 and ’84 seasons while ushering in the “New York Sack Exchange” era in New York. His main partner in crime was Joe Klecko, a four-time Pro Bowler and two-time All-Pro who mastered three different positions on the Jets’ defensive line.

Hall of Fame center Kevin Mawae was one of the best at his position during his time with the Jets. Hall of Fame offensive tackle Winston Hill did a sterling job protecting Namath while helping create running lanes for Snell and fellow Jets running backs Emerson Boozer and Bill Mathis.

Connect with:
Facebook Google Twitter
Back to
log in
Choose A Format
Personality quiz
Series of questions that intends to reveal something about the personality
Trivia quiz
Series of questions with right and wrong answers that intends to check knowledge
Poll
Voting to make decisions or determine opinions
Story
Formatted Text with Embeds and Visuals
List
The Classic Internet Listicles
Countdown
The Classic Internet Countdowns
Open List
Submit your own item and vote up for the best submission
Ranked List
Upvote or downvote to decide the best list item
Meme
Upload your own images to make custom memes
Video
Youtube, Vimeo or Vine Embeds
Audio
Soundcloud or Mixcloud Embeds
Image
Photo or GIF
Gif
GIF format